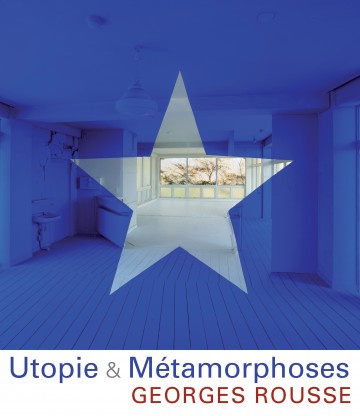 Until the 3rd of March 2019, the exhibition of the 5 years of the Museum Regards de Provence revives in immersive images the metamorphosis of the former sanitary station into a museum.
It is also an opportunity to shed light on the work of the artist photographer Georges Rousse, who was invited to work on the site and gave life to two anamorphic installations. With the artist, the concept of a unique piece takes on its full meaning, the artist intervening exclusively in situ in a relationship of intelligence and sensitivity with the place where he operates, his architecture, his history, the atmosphere.

A utopia is a reality in power
The exhibition Anniversary of the 5 years of the Museum Regards de Provence proposes to revive in immersive images the site of the metamorphosis of the museum inaugurated in 2013. A true utopia to have wanted to transform the old sanitary station maritime of 1948, abandoned wasteland for 40 years, in a cultural center. “Utopia is simply what has not been tried yet! “, says Theodore Monod. To move from an illusory project to its realization, to give meaning to an ambition, to prolong the notion of utopia to a real driving force of creation, was the successful bet. This anniversary gives rise to the invitation of visual artist Georges Rousse to create a new anamorphosis inside the museum, (distorted image by optical effect) to transform an installation made in three dimensions of space (wall, floor, ceiling) in one piece placed in the center of the image. This one echoes with the two previously realized before the transformation of the place in 2011. A large permanent sculpture in the shape of a silver star will also be realized by the artist and installed on the facade and the roof of the museum before the end of 2018. This exhibition presents emblematic pieces by Georges Rousse that have marked his thirty years of creation worldwide, including part of his UtopiA series.

Utopia – Living the anamorphosis in its three-dimensional reality
Georges Rousse has never stopped exploring the world in search of places sometimes abandoned, often patrimonial, sometimes destined to disappear, aiming to compose with their history, even with their memory to load them with an unprecedented artistic dynamic. Mixing architecture, form, inscription, painting and photography, Rousse transforms empty space, magnifies architecture and imposing proportions, uses light to create a temporary and unique work.

The new UtopiA anamorphosis around the staircase of the Regards de Provence showroom is seen in its spatial reality, the spectator is no longer before the photography of the realization but in front of the three-dimensional work from which he can move and appreciate the different points of view which will reveal the deformations and the reunification of the elements exploded in the space.