Colors of the Souths. Antoine and Jos Henri Ponchin 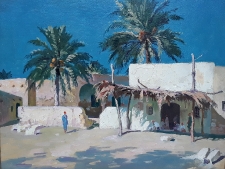 Throughout their lives, they have nurtured a deep attachment to the South, transcribing the light and atmosphere of their native Provence, striving to capture its nuances. They were artists of the spirit of the Marseillaise School, turned towards the representation of the luminous beauties of the Provençal landscape, and attracted by the trips to the South allowed by the door of the East. The multiplicity of their works, both in their style and in their motifs, testifies to their personality and uniqueness. Each in their own way and according to their generation, they have been in perpetual evolution in their work, always united by family ties, by the love of painting and loyalty to the South.

Since its creation in 1998, the Regards de Provence Foundation has defined its major project to honor the particularities that affect the heritage history of Marseille, Provence, the South, the Mediterranean, artistic and human adventures renowned and unique artists. Their role is to honor creators who are more or less known but whose quality of work deserves museum recognition. Antoine and Jos-Henri Ponchin could not escape the honors of an exhibition…

It is an invitation through the eyes of these two Provençal artists who, each in their own way, have sublimated the Colors of the South. Pictorial links that unite them in continuity Many themes illustrate the closeness of father and son, who painted together very early. The views of the canals of Venice where everyone settled with their easel, the play of reflections in the water of the Mirror of birds in Martigues, as well as the Indochinese landscapes are all subjects that they have told in their works. The choice of common sites is sometimes made inevitable by their picturesque and symbolic appeal, such as Saint Mark’s Basilica and the lagoon in Venice, the creeks of Marseilles or, in Indochina, Halong Bay and the shores of Little Lake Hanoi.

The convergence of styles and motifs remained until the mid-1920s, when Antoine Ponchin and his son acquired respectability and honors together. Antoine Ponchin did not remain a “colonial” painter for long. The Tunisian or Indochinese exoticism, the prestigious decorations (the Legion of Honor and the Order of Annam) did not make him forget Provence and the search for light. He remains faithful to an impressionist spirit where he once again promotes his native Provence with the serenity that characterizes his personality and all of his work.

We could point out that Jos-Henri Ponchin had a career trajectory reversed to that of his father. Having achieved notoriety very early on, he gradually faded from the artistic scene. Although he in no way denies his family heritage, Jos-Henri significantly changed his pictorial style in the mid-1920s during his stay in Indochina. His work manifests the temptation to paint differently. It is on a ridge line between tradition and modernity. The variations of support, gouaches on paper or on cardboard in Indochina, oils on canvas or on panel in Provence, are not only the result of a provision or a lack of materials: they testify to a desire to experiment. . These temptations will lead the artist to return – like his father – to his native Provence, as if these attempts were futile compared to the joy provided by a painting dedicated to the transcription of his Provencal living environment. The result is a powerful anchorage to the land and the Mediterranean shores. The modernity of the 1920s and 1930s will give way to a return to orderly and soothing southern landscapes.